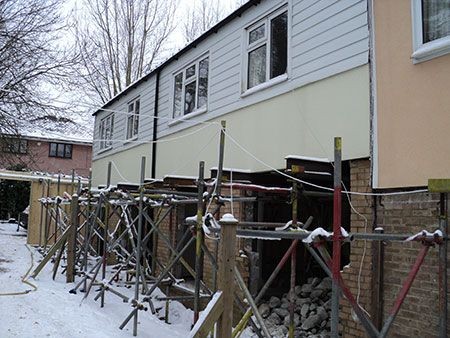 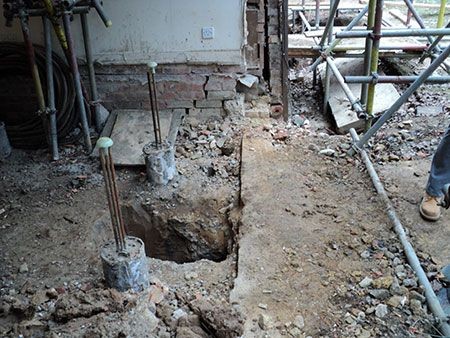 Subsidence problems to properties are general minor and straight forward to deal with.

Typically the cause is readily identifiable (i.e. the influence of a tree or a leaking drain/pipe) and once the cause is removed the property stabilises requiring only localised superstructure repairs and redecorative works.

On occasion subsidence problems can be very complex. It is very rare that a property suffering damage as a result of heave and/or landslip is a straight forward matter.

When a building is suffering damage caused by a complex subsidence problem, heave or land slip there is no substitute for experience and technical excellence.On occasion impartiality can unlock the correct solution.

The pictures opposite are of a series of properties which at first sight appear to be suffering downward movement and rotation outwards of the rear elevations at ground floor level as a result of the influence of a series of trees.

Investigations however identified that the rear elevations had been previously underpinned although the underpinning had not been extended below the depth of the roots. Even so the cause was not subsidence.

A detailed review of the mechanism of damage and investigations confirmed the problem to be heave.

A scheme of repairs involved installing a piled raft foundation to the complete building and reconstruction of the rear elevations at ground floor level.

By accepting you will be accessing a service provided by a third-party external to https://www.pyleconsulting.co.uk/